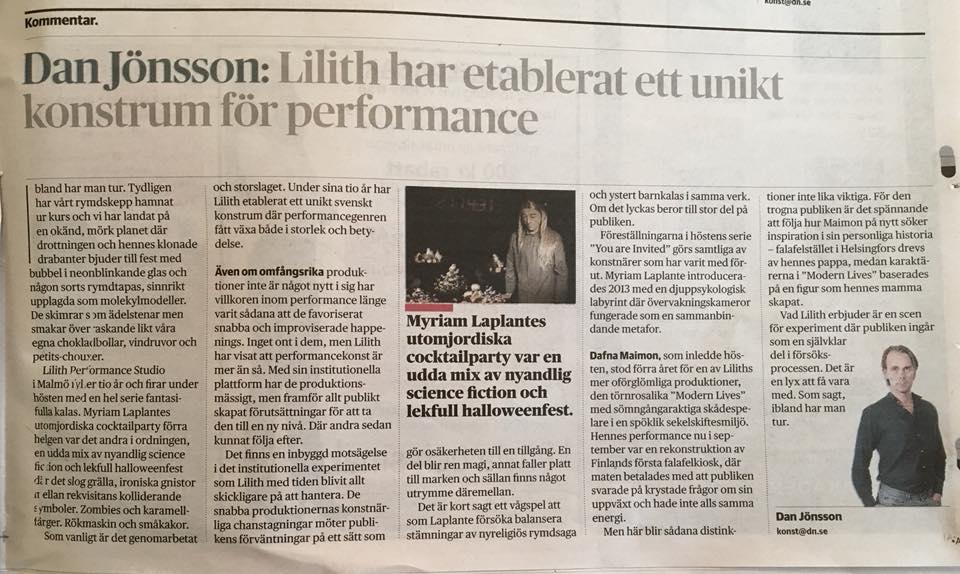 In the newspaper yesterday about Lilith, The gateway and Orient Express, Yourself! GREAT!

” Sometimes you’re lucky. Apparently, our spacecraft has fallen off course and we have landed on an unknown, dark planet where the queen and her cloned satellites invite to a party with bubbles in neon-blinking glasses and some kind of space-tapas,

ingeniously sereved as molecular models. They shine like gems but taste surprisingly similar to our own chocolate balls, grapes and petits chouxes.

Lilith Performance Studio in Malmö turns ten years and celebrates during this fall with a whole series of imaginative parties. Myriam Laplantes extraterrestrial cocktail party last weekend was the second in the series, an odd mix of new- spiritual science fiction and playful Halloween party where it struck garish, ironic sparks between the props colliding symbols. Zombies and caramel colors. Smoke machine and cookies.

As usual, it is well-worked and magnificent. During its ten years, Lilith has established a unique Swedish art space where the gengre of performance been allowed to grown both in size and importance.

Although extensive productions are not new in themselves, the terms of performance have long been such that they favored fast and improvised happenings. No bad in that, but Lilith has shown that performance art is more than that. With its institutional platform, they have productionwise, but above all, audiencewise created conditions for bringing it to a new level. Where others could follow.

There is a built-in contradiction in the institutional experiment that Lilith has become increasingly skilled in dealing with. The artistic chances of rapid production meet the audience’s expectations in a way that makes uncertainty an asset. Some become pure magic, some fall flat to the ground, and rarely there is any space in between.

In short, it is a risky venture, which as Laplante, try to balance the moods of the novelty space story and the yawning of children in the same work. If that succeeds depends largely on the audience.

The performances in the autumn series ”You are Invited” are made by all artists who have been in the past. Myriam Laplante was introduced in 2013 with a deep-psychological maze where surveillance cameras acted as a connecting metaphor.

Dafna Maimon, who started the fall, stood last year for one of Lilith’s more unforgettable productions, the Sleeping beauty –like ”Modern Lives” with somnambulist-like

actors in a spooky century-shifted environment. Her performance now in September was a reconstruction of Finland’s first falafel kiosk, where the food was paid by the audience responding to strained questions about their growth and did not have the same energy at all.

But here, such distinctions are not as important. For the faithful audience, it is exciting to follow how Maimon is looking for inspiration in her personal history – the falafel place in Helsinki was run by her dad, while the characters in ”Modern Lives” were based on a figure her mother created.

What Lilith offers is a scene for experiments where the audience is included as an obvious part of the trial process. It’s a luxury to be a part. As I said, sometimes you are lucky.”

”The Gateway is a most interesting and wonderful strange sci-fi dinner to be a guest in” — Very nice review of YOU ARE INVITED – The Gateway in Kunsten.nu!

Category : Uncategorized
” The Gateway is a most interesting and wonderful strange sci-fi dinner to be a guest in, where you switch...

Category : Uncategorized
An entity from a parallel universe – First Try out yesterday! DREAM TEAM for real <3 The Gateway by the...